Table Tennis falling through the "Cracks" at Gay Games 9. 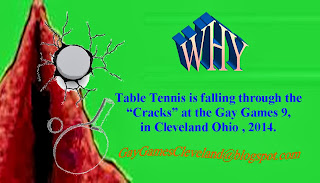 LGBT Table Tennis is falling through the “Cracks” at the Gay Games 9, in .
Interview by Community Voices Heard.

Pink founder Wolf Busch, also known as the "Daddy" for Table Tennis in the LGBT community in the , announced his resignation from co-producing the table tennis tournament at the 2014 Gay Games in . The lack of the Gay Games transparency, the lack of resources, vision, Tom Waddell spirit, experience and community sensitivity, left Busch disappointed, spiritless and with no motivation wanting to continue.

After dealing with Gay Games staff for over one year, the table sponsor, a famous actress for an ambassador position and the table tennis venue have all fallen through, Busch says. It gets worse, after Rob Smitherman couldn't’t deliver, they hired an assistant asking Busch the same questions he had already answered over a year ago, and they sound like a broken record.

Table Tennis, a sport that is still in the development in the was also denied a voting membership, because it didn't’t fit the Gay Games rules and regulations. Pink Pong NY, the only organized LGBT Table Tennis club in the United States believes in organic natural progression and does not believe in the not for profit model. History revealed that the not for profit model is very easy to corrupt by special interest groups and power struggling members from the community. Unfortunately the Gay Games is still focused on this old model, which is one of the reasons why they are failing to nurture and serve the LGBT table tennis community the right way. No voting membership, no voice, no transparency, no vision, do the math, no table tennis.

The Table Tennis Daddy also states, instead of working together as a team, he was talked at and was given the choice between playing on concrete or carpet. Both options are reasons for players to not wanting to participate. When Busch asked Rob Smitherman, in charge of sports, if there was another floor option, it was a flat out “NO”. When Busch asked Smitherman if table tennis has any input on how the table tennis money was spent and who is in charge of it, no answer and no transparency.

The original table tennis venue was the size to hold 3 tournaments at the same time and the rental cost was $3000. After Smitherman realized that table tennis doesn't really need this huge venue, he changed it and failed to notify the registered players who made already hotel reservations near that venue. Those are typical signs of not caring and shows the disconnection with the community. Leave it up to the lawyers and it is guaranteed to fail, Busch says.

Busch also complains about the lack of nurturing Table Tennis across the board, because Table Tennis is still under-developed in the and needed special attention. Busch sent out a letter of concern to board members and staff requesting an experienced person to assist him after all fell through. The email response was quite disappointing. Officials who did respond, including the main Gay Games guy Kurt Dahl, they all sounded very corporate and disconnected from the community, like they had to respond to my letter of concern rather than show real concerns and care. All they had was questions and not one answer to anything.

After more research about the staff, we learned that staff was hired based on who they know and how many college degrees they have, rather than what they know about sports development and tournament production. It comes to no surprise that at the end of the day it all plays out like this.

After Busch added up the “NO” results and the interaction with Gay Games staff, he wasn't going to wait and see what was going to happen in . He wasn't going to put his reputation on line for people wanting to build their resume on the backs of the local sport clubs.

Reading the Gay Games Facebook posts, Busch also feels a lack of sports promotion in general. Rather than using social media and the resources to nurture all the sports and to promote the venues to draw an audience, too many resources are spent to promote the city of and Sightseeing Tours. The Gay Games turned into a marketing company for the city of , instead of using the hundreds of thousands of dollars from the registration fees to invest and nurture the sports. This may explain why there was a break off from the Gay Games within the LGBT sports community and they started the Outgames, (GLISA), because all this makes no sense to me, Busch says.

Instead of spending our money, creativity and energy towards the Gay Games and support their corporate special interest, we are much better off to invest locally and produce the First US Open Table Tennis Tournament in in September of 2014. We are giving out cash money and prizes to attract players from different countries and we are better off expanding our local infrastructure for future table tennis generations to enjoy and benefit.

Table Tennis is falling through the “Cracks”

at the Gay Games 9, in Cleveland Ohio 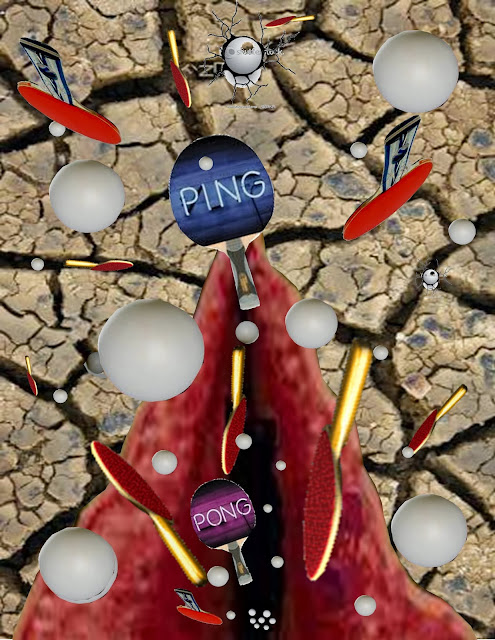 Dear Gay Games Cleveland administration,
due to unforeseen Table Tennis circumstances to participate in the Cleveland games and the resignation of Wolfgang Busch, the Table Tennis community feels that the Gay Games organization should reimburse the registration fees to the athletes for the following reasons:
1) the table sponsor falling through
2) the table tennis spokes person falling though
3) the venue change to a location to play on concrete or carpet is not acceptable for Table Tennis
4) the lack of transparency and respect leading to the resignation of the co-producer Wolfgang Busch
5) the lack of communication by Gay Games officials since the change of venue
6) no communication at all after the resignation by Mr. Busch with the Table Tennis community
The lack of resources and staff experience to provide the minimum safe sports requirements and community sensitivity makes it impossible for the table tennis community to have a memorable Gay Games experience in the spirit of Tom Waddell. The series of events was unexpected and it came as a surprise to us, especially after we experienced excellence at the Cologne games.
For the above mentioned reasons, it should be a curtsey by the Gay Games administration to reimburse all table tennis registration fees.
Your cooperation is very much appreciated and we are looking forward to hearing from you.
Sincerely
Wolfgang Busch


Below is an email to Wolfgang from Gay Games officials.
Is this what true leadership is like?

Please do not do this again.


Hello Marc and the rest of you guys,
the reason for the post is that I feel a responsibility to inform the sports community, from which you can learn from, because you all clearly fail to do so over and over. You continue to disrespect our community by trying to delete this problem away again and again, but it is still a problem until it is addressed properly and with respect. To this date the table tennis community has not been informed of any changes. You all are acting like some type of a superior organization, paying yourselves a salary off the backs of the sports community and you think that you can just run over the community.
Show some respect to our community and inform the community about table tennis. Shame on all of you.
Wolf


Gay Games Cleveland in Damage Control Mode.
In the press release below they are padding themselves on their backs on how great of a job they do in Cleveland. This is what organizations do when they cover up their mistakes for damage control, they tell each other in the media how fabulous they are so the public buys into their crap. They moved table tennis from wooden floor and suggested to play on carpet at this
BRAND NEW FABULOUSLY LOCATED AND
WITH ALL THE BELLS CONVENTION CENTER... WOW.
What they fail to say is that you all have to play on carpet or concrete. Now for sure nobody will show up. Its like telling the swimmers to jump into the pool with NYC dirty Hudson River water.
CLEVELAND, WE SALUTE YOU, JOB WELL DONE.
Can you guys in Cleveland get more stupid?
Maybe in the next Gay Games press release you can TRY to discredit Mr. Busch even more,
just to be on the save side? Cleveland, you are the laughing stock now. 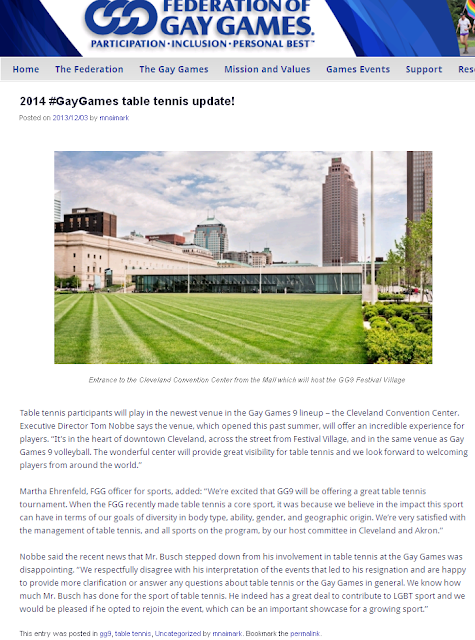 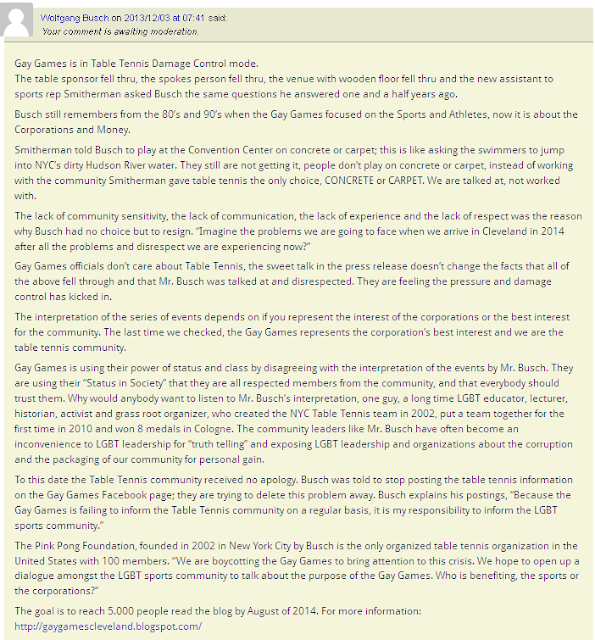 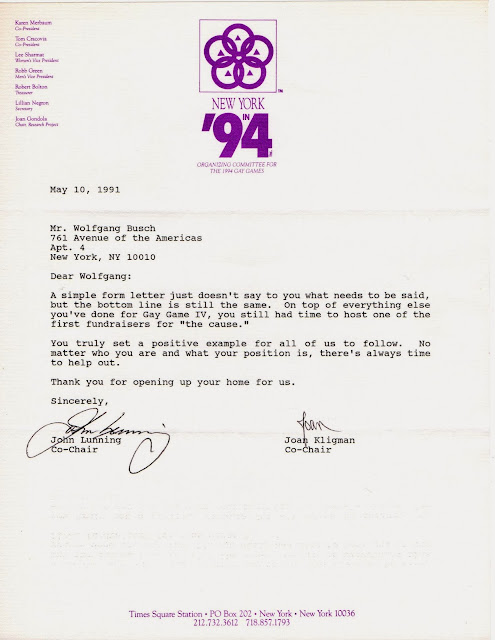 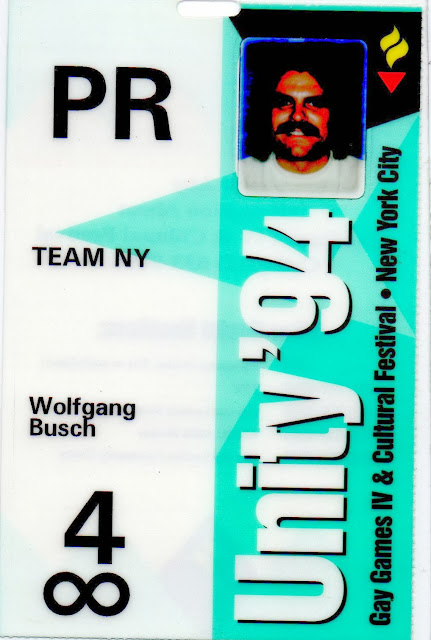 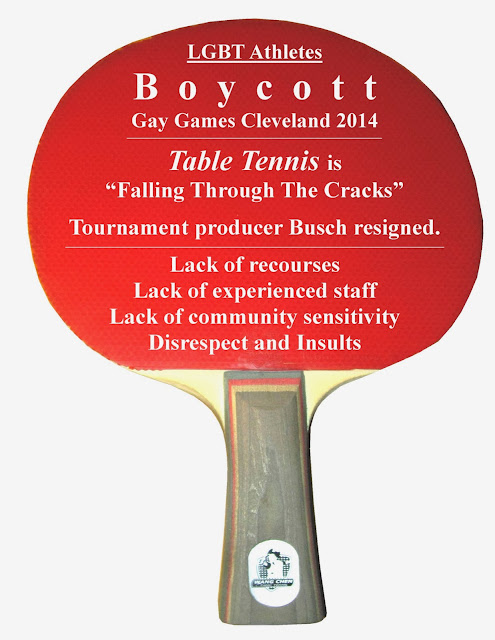 Over one third of the "Crooks" on our poster have been fired, one is in jail.
Until they are all "FIRED", I job continues. 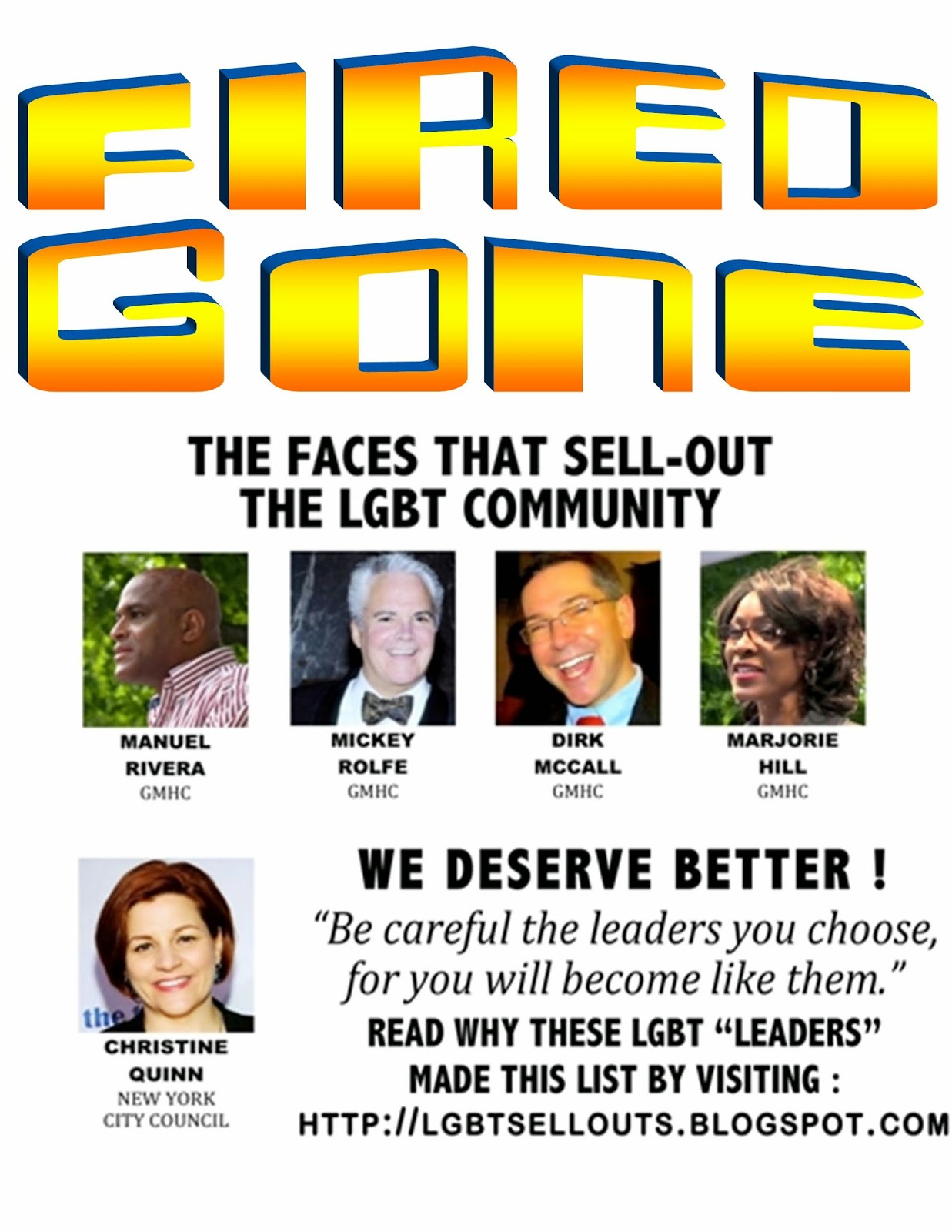 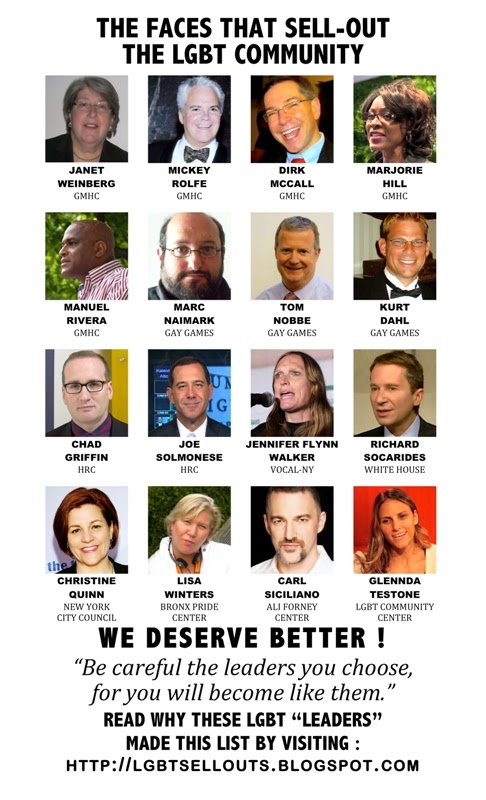 Posted by Artistic Empowerment at 6:55 AM